Most Popular Sports in the U.S. and Canada

I am beginning to write this article while glancing at an American football game on my TV. I have no particular attraction to any particularly team nor am I familiar with the rules, but still I watch American football games on TV, at times. For, unlike rugby, forward passing is permitted in American football, and this makes the game quite speedy and dynamic. In addition to this, despite the fact that really gigantic men run at each other, surprisingly, there is no violence between players and skirmishes rarely occur. So, the game looks very pleasant. The progress of the game is never interrupted by meaningless squabbles, and one down (the situation in which the ball is judged halted as, for example, when the ball holder for the offense falls to the ground) is immediately followed by a subsequent attack. Thus, the players are in a hurry to prepare the next down and it makes American football look fast and energetic, too. American football is the most popular sporting event in America, the popularity being notably higher than that of baseball and basketball.

On the other hand, ice hockey is the most popular sport in Canada, and it is designated as the winter national sport in Canada. In fact, ice hockey is the sport in which Canada is strongest in international competitions. Ice hockey is characterized by speed and power. Since a hard puck is hit on ice, which has little friction, its speed is high, for professional players, 160 km/h or more. Because players skating on ice hit each other without lowering their speed, the impact is extraordinary, but such violent collisions are a popular part of this sport. 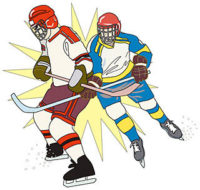 Every day in the season, games of the NHL (National Hockey League) are televised, and Canadians are so enthusiastic about the game that riots could occur over the results. However, I don’t like to watch hockey games. The reason is simple: because ice hockey is really full of violence.

Players engaging in fist fights is not unusual in ice hockey. What is more unpleasant is players’ intentional physical attacks. In ice hockey, a physical contact called a “body check,” blocking an opponent with an elbow or a shoulder so as to take the puck or to interfere with the motion of an opposing player, is allowed. But, the fact is that, under the name of body check, unnecessary and outrageous physical attacks meant to particularly hurt the opponent, or hitting the opponent with an elbow or stick while deceiving referees, are quite normal occurrences. It is clear that hockey players possess the mistaken idea that being violent is manly. But, violence in sports is totally unexciting.

American football originated from rugby football in Britain, evolving in the U.S. into American football as it is seen today, while ice hockey was born and developed in Canada. Currently, both American football and ice hockey are popular sports on the same North America continent, and both are games in which gigantic men collide with each other violently. Then, there is a mystery: very little unnecessary violence occurs in American football, whereas there are lots of gratuitous violent acts in ice hockey. Why are these games so different? 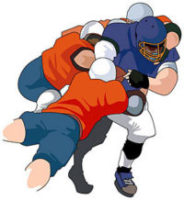 Here, I would like to refer to an excellent book concerning the history of American sports: “The Rise of Big-Ten College Athletics”, by Ronald A. Smith, published by Oxford University Press in 1988, as Smith describes how violence was overcome in college athletics. A Japanese edition of this book has been published with a title The Birth of College Sports, Yoshiro Shiraishi and Kouzo Iwata, supervising translators, published by Tamagawa university press in 2001. I was privileged to be included as one of the translators of the Japanese edition, and transcribed one chapter which describes how university authorities and faculties agonized over controlling the uninterrupted expansion of college athletics.

This article is a revision of the article entitled “In-Depth Cultural Comparison, No. 1: Comparing Canada and America; Ice Hockey vs. American Football” printed in Japonism Victoria, vol. 8 no.2, 2013 published by Japanese Canadian Community Organization of Victoria.