College students in those days were forced to live an oppressive life in which classes were mainly comprised of recitation of Greek and Latin (rote learning) while dormitory life was full of rules, so extracurricular activities were the only thing they found in their college life to which they could devote themselves for personal reasons. Those students who loved college athletics, and the idea of making full use of their physical power so intensely, had to spend their surplus energy in extra hours in ways other than games or exercises, if they were not playing. Thus, intercollegiate athletic games were commonly associated with student misconduct such as drunkenness, turmoil and breaking things. It caused great distress to college faculties, too.

In addition to these, since football was really a “dangerous sport” causing many casualties, it was frequently questioned by faculty with regard to the violence and brutality. In fact, several deaths occurred every year in football games. Although the death toll in the earlier years is unavailable, a record shows that in 1905 there were eighteen deaths in football games. It could be three in intercollegiate athletic games according to Watterson (*1). Since football was a terribly dangerous sport, and college athletics themselves were troublesome things, it is not hard to imagine that for college faculties football was the worst sport to deal with.

The college faculties repeatedly argued to ban the violent game of football. In fact, some universities abolished football. Eventually, an incident called the “Football Crisis,” which is very famous in the history of American sports, occurred. It was in the autumn of 1905.

Some time before, several faculties attempted to set up an inter-institutional athletic committee comprised of representatives of several universities to discuss general rules and regulations with reference to football, the game which caused the most casualties. This was because football was considered too dangerous and the problem too difficult for the participating universities to deal with individually. However, since the universities had their own policies with regard to college athletics and the supervision of students, the inter-institutional committee plan finally ran aground. 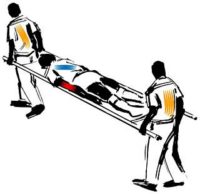 Meanwhile, in the autumn of 1905, a photograph of a bloody face of a college student Bob Maxwell who got injured in an intercollegiate athletic game of football was carried by a newspaper. President Theodore Roosevelt was enraged by the brutality and the lack of sportsmanship in football, and called college gownsmen to the White House and threatened to prohibit football unless it was reformed. This was called the “Football Crisis” by the general public. In this affair, Roosevelt was spoken of as a savior who saved football from the crisis of abolition.

Anecdotes featuring a politician rarely mention them this favorably, and in this football crisis as well, the facts are a bit different from the public perception. In the first place, the President had no authority to abolish sports. Rather, Roosevelt himself was fond of football, and before the injury to Maxwell was reported, he thought about how the bloody sport could be reformed. Finally, he invited representatives of Harvard, Yale and Princeton, which were major college athletics schools, to a lunch in the White House and suggested to them to found an inter-institutional committee (*2).

Furthermore, everything was not solved by the “words of authority” from Roosevelt at all. Although the gownsmen began to move toward starting an inter-institutional committee, since major universities were competing with each other and people had their own expectations, things did not go on smoothly. After many twists and turns, the National College Athletic Association (NCAA) finally started in 1906, the next year. Since football was the leading sport in college athletics, the NCAA afterwards developed into a top organization governing the whole of college athletics. However, ad initium as it started, Harvard and Yale engaged in a struggle for power and did not participate in the NCAA. Thus, the launch of the NCAA was very uncertain. Several years were needed until the administration of the NCAA got on track and major universities agreed upon reform of football. Furthermore, casualties continued in football games afterwards, and football crises occurred many times. Every time, the rules were reformed and, finally, as late as in the latter half of the 20th century, unnecessary roughness of football had almost gone.

The NCAA was founded a half century after the regatta game was held between Harvard and Yale, which was the first intercollegiate athletic game in American history. During this half century, while the college faculties were agonizing over the several dilemmas involving college athletics, they struggled with these difficult problems quite sincerely. It could be said that the efforts of the faculties finally succeeded in and lead to the foundation of an inter-institutional committee, the NCAA.

Walter Camp is known as the “Father of American Football”. He was a famous football player and became afterwards the athletic adviser of Yale. He made a great contribution to the development of football in the area of establishing rules, for example. He was critical about the participation of university authorities/faculties in college athletics, and stated as follows: “Neither the faculties nor other critics assisted in building the structure of college athletics. It is a structure which students unaided have builded.”

According to Camp, what the faculties did would be nothing but interference in college athletics. For sure, the faculties had neither the time for administering the students’ activities in detail nor technical knowledge sufficient to do it. Thus, they might be able to participate in the college athletics only by imposing restrictions on the students’ activities. However, the reason why football was able to overcome its most serious defect, violence, and lack of sportsmanship is very much because faculties interfered with college athletics, including football. Camp was an outstanding football player, and he seems to have had a pre-modern aesthetic of “being strong is manliness.” However, probably due to such pre-modernity, the authority of Camp in the world of football faded rapidly after the foundation of NCAA, that is, the beginning of modernization of football.

This article is a revision of the article entitled “In-Depth Cultural Comparison, No. 2: Comparing Canada and America; Ice Hockey vs. American Football” printed in Japonism Victoria, vol. 8 no.3, 2013 published by Japanese Canadian Community Organization of Victoria.