Ice Hockey: A Sport Having Missed the Bus for Modernization

In contrast to football, ice hockey missed the “bus for modernization”, I believe. Players’ fighting with fists during ice hockey games is not unusual at all, and this is essentially the same as football games in the 19th century. Clearly, players and coaches in ice hockey are dominated by a pre-modern ethos or spirit of “being strong is manliness.” In fact, among modern sports, except martial arts, ice hockey is the only sport in which players fighting with fists in front of the public is allowed (*3).

It is very hard for me to think that Canadians being gentle at heart and loving “Tim Hortons” (*4) so much are essentially fond of violence. But, I am a bit confused with one mystery. In Canada, when a film or video including violence or sexuality is shown on TV, a message warning that viewer discretion is advised is displayed so that nothing inappropriate is seen by children. However, why are such thoughtful Canadians so unconcerned about the repeated fights during televised ice hockey games which are shown without any warning? It is a real mystery to me. Is ice hockey some kind of exception?

As far as ice hockey is concerned, it seems as if time halted in the 19th century. Why? What does it mean? 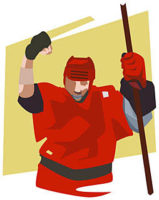 I believe that probably it is indeed one aspect of the Canadian culture. But, why is it so? Probably, this results from Canada’s extraordinarily lucky history that Canadians have had little experience of being driven into a corner or a really miserable situation.

The meaning is as follows. Canada did not need to take a stand against Britain as America confronted Britain in the American Revolutionary War. Namely, since Canada remained in the British Commonwealth, Canada didn’t need follow the U.S. that entirely denied the authority of the British sovereign and opposed to Britain to establish a government based on the people’s will. On the other hand, however, Canada was able to at least partially import the fruits of the democracy born and nurtured in America, the neighboring country. As a result, while there are differences in the details, Canada have been able to build a democratic nation generally analogous to the U.S. Thus, Canada got the fruits without making substantial sacrifices.

This is, so to speak, a schema: Americans being driven into a difficult situation have to strive desperately to find certain measures to resolve the difficulties; then the results are imported into Canada to enrich Canadian society. We can see such a schema in evidence in various places in the society of Canada.

In such a schema, it is very natural that Canadian people are attentive to trends in America. For, there might be some “fruit” there which can be imported into Canada. The TV news programs in Canada include a lot of reports about matters happening in the U.S. A typical example is the fact that in Canadian news programs the U.S. President appears more frequently than Canadian Prime Minister. This can be regarded as a sign of the behavioral tendency of Canadian people, keeping their antennas directed toward America. 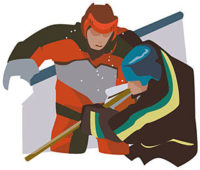 The same schema applies to the college athletics described above. In college athletics as well, Canada was very lucky, because most Canadian universities were public schools founded by provinces, and there was no need to attract a sufficient number of fresh students every year as in private schools. Therefore, compared to American college faculties, the faculties of Canadian universities were not annoyed by the same problems as in American college athletics and were not forced to struggle with them. However, on the other hand, the fruits of the modernization of football, which was born from the anguish of the faculties of American universities, was fully imported into Canadian football. Here, Canada got the fruits without making sacrifices, again.

Furthermore, at least up to now, most Canadians have deemed ice hockey as a sport having no major problem needing to be considered seriously. Thus, ice hockey has been frozen for too long, maintaining its pre-modern status.

*3:    The current rules prescribe a very light penalty for violence, and do not function to stop violence. The frequent occurrences of fights are evidence thereof. For instance, when some player is subject to sitting out of the game as a penalty, a substitute player can participate, in his place, immediately. Thus, the pursuit of victory is not affected at all.

*4:    “Tim Hortons” is the name of Canada’s largest fast food chain restaurant mainly featuring doughnuts and coffees. It is loved by many Canadians of a wide range of ages. The name comes from Tim Horton who was a famous professional hockey player in the mid-1900’s and who was one of the founders of the restaurant.

This article is a revision of the article entitled “In-Depth Cultural Comparison, No. 2: Comparing Canada and America; Ice Hockey vs. American Football” printed in Japonism Victoria, vol. 8 no.3, 2013 published by Japanese Canadian Community Organization of Victoria.